skip to main | skip to sidebar

The Okotoks Oilers play 5 preseason contests starting with a home game Tuesday, September 1st against the Calgary Canucks and a second home game on September 3rd against the Olds Grizzlys.

The Oilers play 10 regular season home games on Friday nights. The second most popular night for home games is Tuesday and Saturday nights with 7 games on each night. No home games are scheduled for Wednesday nights.

The Okotoks Oilers start the season on Saturday, September 12th. with 2 games on the road, then they return home Friday, September 18th for the home openner against the Olds Grizzlys.

The full schedule will be on the official Okotoks Oilers website soon.
Posted by Hildavid at 3:54 PM No comments:

Dawgs are sailing along.

As of June 22, the 10-6 Okotoks Dawgs are starting to find their stride. After posting their biggest offensive victory last night against the Edmonton Prospects, a 17-3 win, the new Dawgs are settling into their new team quite nicely.

Good home crowds of around 2000 per game are enjoying the great summer nights and a great baseball atmosphere at Seamans Stadium.

With the regular season about 1/3 completed, you can't put off not coming out to a ballgame.

It's good to see many of our AJHL Okotoks Oilers fans out to the Dawgs games.

The Okotoks Parade held this past Saturday had both of our sports teams parading down the street. Here's a few pictures from the parade.

Dawgs even their w/l record

The Okotoks Dawgs evened their 2009 record on Wednesday night to 3 and 3 with an impressive 3-0 win over the Edmonton Prospects. On a very pleasant night, a good crowd cheered on the hometeam to victory. Check out all the details on the Dawgs website.
Posted by Hildavid at 8:28 AM No comments: 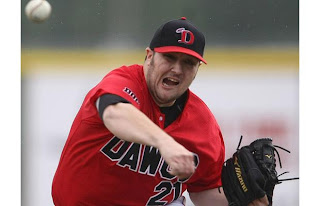 The Okotoks Dawgs opened the 2009 season on a cool, drizzly night at Seaman stadium. While they lost 8-3 to the visiting Lethbridge Bulls, it was a fun night.

Pretty well a sell-out, it was good to see some of our old baseball buddies such as Reid, Joanne, Dave and of course, our hockey fans too.

There are 23 home games. We are missing tonights game (game 2 against Edmonton) because of the John Fogerty concert, but will be back to the diamond on Saturday, weather permitting.

The only major change is the following;

The 2009-2010 AJHL Regular Season Schedule will consist of 16 teams playing an unbalanced schedule of 60 games apiece beginning on Friday, September 11th, 2009. The AJHL Board of Governors voted to remove two regular season games from the schedule at the 2009 Semi Annual Meeting in January.

The League will continue with the same Playoff format as used in the 2009 AJHL Playoffs; the format is up for renewal in the 2010-2011 season. In 2010, the AJHL will grant home ice advantage to the Division Champions throughout the AJHL Playoffs.
Posted by Hildavid at 9:00 PM No comments:

Hildavid
I am just a fan of local sports such as baseball (The Okotoks Dawgs) and hockey (The Okotoks Oilers). This blog was started in response to a very outdated, uninformed website of the Okotoks Oilers back in 2008. As a fan, I wanted up to date stats, reviews and general talk about our team. The offical website did not have it, The AJHL website is a great site for some of this information. So, hence, I started this blog where I can rant and rave all I want.